You are here: Home / About / Kathleen Warner Yeates / Directing Actors for Film – Specialist

Kathleen Warner Yeates has worked closely with many film directors to provide key insight into how to bring out the best performance from film actors or from non-actor spokespersons in commercials.

In-depth preparation allows the director to maximize the effectiveness of the shoot day, and be sure that the performances captured on camera are the highest standard.  Kathleen can consult and advise in script development, pre-production and casting; and can also work in rehearsals and on set to deepen the inner life of the characters, clarify relationships, and bring shape to the actors performances. See testimonials below.  For more information Contact Us.

“Kathleen’s knowledge and experience when it comes to developing characters is wonderful. Working with Kathleen we discussed casting techniques, and she helped provide key insight into how to bring out the best performance from film actors. I thoroughly enjoyed working with Kathleen and would recommend her to any director or production team.”

“I contacted Kathleen when I was working on some very sensitive film work for a domestic violence charity. Kathleen was amazing to work with, she knew the right type and temperament of young person I needed to cast in some quite challenging roles. Kathleen also worked with the cast and I in rehearsals, working through difficult scenes and helping create very real emotions when required within in the actors without overworking or over-rehearsing, which is a very special talent. Her approach to each character, scene and demand is extremely well gauged and her keen sense of collaboration within a working crew is invaluable to any production. I very much enjoyed working with Kathleen and wouldn’t hesitate to recommend her!” 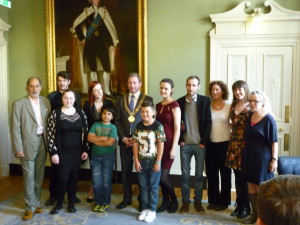 Short Film “Me Buddy, Muhammad” cast and director with Lord Mayor of Dublin, Cllr Oisin Quinn at The Mansion House

“During the pre-production stages of my short film, Kathleen provided in-depth analysis of the characters, suggestions on how to develop them and the best approach to casting. Kathleen’s knowledge and experience when it comes to developing characters is unrivalled. The main characters in this project were children and as a director who was working with kids for the first time I was nervous.

Kathleen’s guidance and coaching help me to succeed in casting talented child actors, effectively execute fun and productive rehearsals and encourage the best performances from the actors on set. Kathleen was a fountain of knowledge when it came to coaching young actors, interacting with them and finding out the best ways to motivate their actions on screen.

I would be quick to recommend Kathleen to any Director or Production team looking to develop their characters and strengthen actors performances. “

Kathleen was a huge help to me during the auditioning process. I had never auditioned children before and didn’t realise just how crucial it is to talk to them in a certain way. Her tips and tricks were a massive help to me in finding my actors, a process which would have been much longer without her input and expertise.”