Part of our expansion includes the new course options for screenwriters under the expert guidance of Barry McEvoy.  Next week we will be presenting “FIRST LOOK” featuring excerpts from 8 selected full length screenplays that will be shared on Thursday evening, 7:30pm, April 28th, 2016 at Doyles Pub, 9 College Street, Dublin 2, in the downstairs lounge. 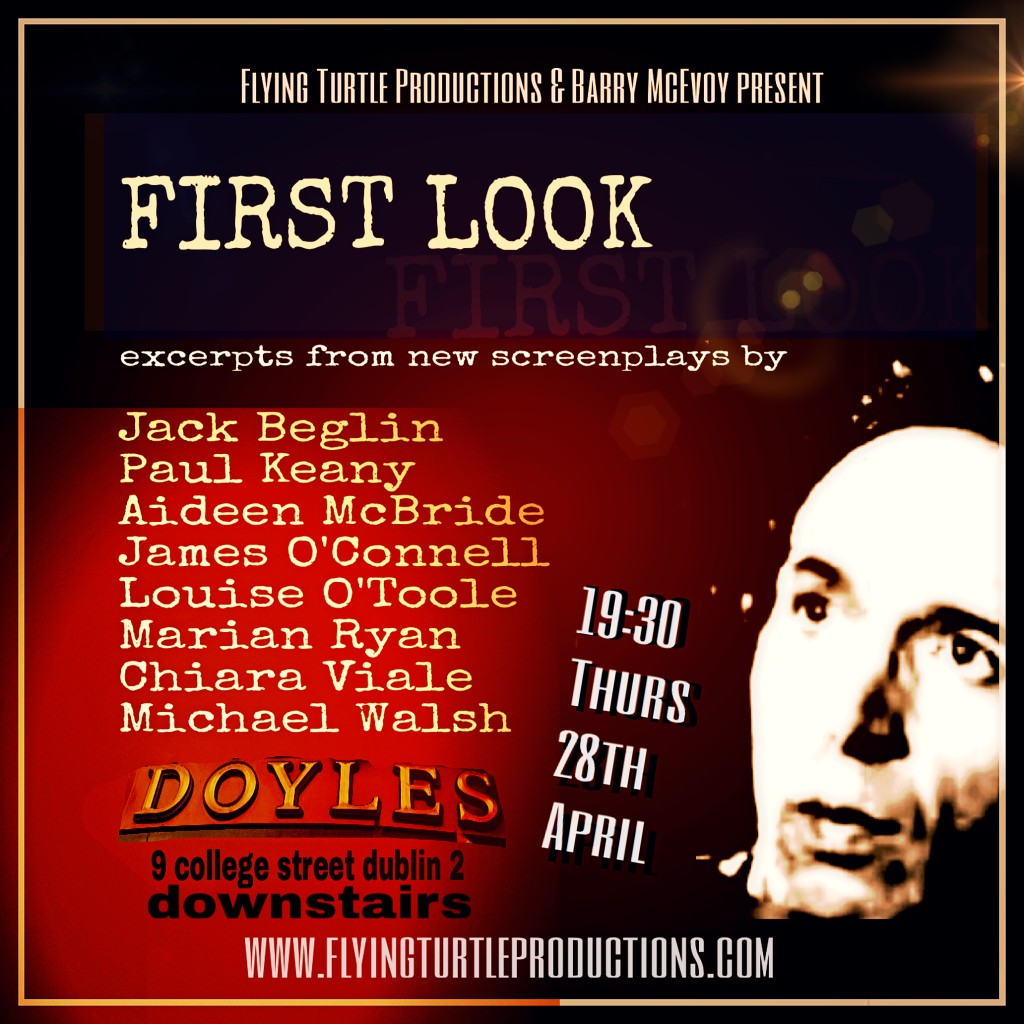 The writers for this “Screenwriting- Experienced Level” course were selected from submitted writing samples or from “Introduction to Screenwriting” course participants. Class size was limited to eight students maximum in order to provide the highest quality of tuition. Over the past 3 months, they have been writing under the inspired guidance of Barry. More than just a formulaic re-hashing of Hollywood writing advice, this course has creatively delved into the individual voices of these writers to bring original, dynamic and engaging scripts to fruition. Writers include: Jack Beglin, Paul Keany, Aideen McBride, James O’Connell, Louise O’Toole, Marian Ryan, Chiara Viale and Michael Walsh.

Barry McEvoy has over 25 years professional experience in Theatre, Television and Film, collaborating with world renowned artists in the U.S., Ireland and U.K. He wrote and acted in the Barry Levinson, Dreamworks production An Everlasting Piece. As an actor or writer he has collaborated with renowned industry professionals including; Mark Johnson (Breaking Bad), Joel Schumacher (Veronica Guerin) Sidney Lumet (Dog Day Afternoon), Karel Reisz (The French Lieutenant’s Woman) and Oliver Hirschbiegel (Five Minutes of Heaven). He has written feature screenplays for Artisan/Summit and Dreamworks and, completed rewrites for Workhorse Films, Parallel Pictures and Touchstone. Variety Magazine awarded him Screenwriter to Watch (2000) and he carries an MFA in Playwriting from The LIR academy, Trinity College. His extensive theatre CV includes work by Harold Pinter, W.B. Yeats, John Osborne, Brian Friel, Wendy Wasserstein, Samuel Beckett, Conor McPherson and Vaclav Havel and, he is a founding member of Scena Theatre, Washington DC. His next film SHAM is being produced by Deadpan/Grand (Moone Boy) and Baby Cow (Philomena), to be directed by Peter Cattaneo (The Full Monty).

COME JOIN US at 7:30pm on Thursday, April 28th at Doyles Pub, Downstairs.
No reservation needed, just come and enjoy!

NEXT Screenwriting course options are being finalized soon! To express interest or receive additional information click here to “Contact Us”