Kathleen and the women on the Peacock Stage at the Abbey National Theatre, taking questions following the production

Kathleen and the women of this group, with the support of the Abbey Theatre, together devised an original piece to tell the story of how the founding members set up the first ever Traveller Primary Health Care Project. For the first time Travellers went out into the Traveller Community with the aim to identify the health needs of Travellers. The Project began as a pilot initiative in October 1994 and has thus been established as a joint partnership initiative with the then Eastern Health Board and Pavee Point.

Speaking on the process Kathleen said: “The stories of these women were so inspiring,  my challenge was to try to give the audience a glimpse of what they have accomplished with their work. This project was the tip of the iceberg and, as part of the Abbey 5×5 project, we were to look at this as an exploration of the full story. The audience response was outstanding, as they gave a long and hearty standing ovation for these women and their work. ” 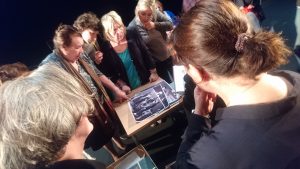 Pictured on the left is the moment the Abbey artistic director and staff gathered to welcome the Pavee Point group. Mairaed Delaney, the Abbey archivist, dug out photographs and written material from previous productions on the Abbey Stage that had included or referenced the Traveller community.